By admin on December 9, 2013 in Articles, Athletics

On a chilly night in December 1963, a group of women wearing an assortment of loose clothing assembled outside the Trinity grounds on Santry Avenue for a 600 yard race. 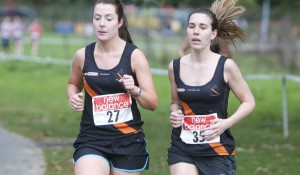 Ireland and indeed Dublin was a very different places back then. Santry, where Billy Morton had built his dream stadium, was on the outskirts of Dublin. The grounds had belonged to a stately home called Domville House, described in its time as “minor scale Versailles Palace” but long abandoned to nature.

In the surrounding areas, there were no Ballymun towers looming in the background and no identikit housing estates. Santry was a village; there was the pub, a post office and a few shops. Green fields stretched in all directions.

Clonliffe Harriers, founded in 1886, had bought the land in 1955 and built a new stadium, complete with a seven lane state-of-the-art cinder track ringed by a cycle lane. The facility – and the club – was strictly men only. Although many girls’ schools continued to promote sport and athletics, these were largely subterranean activities, unregarded and unreported, especially after the dark days of the 1930s, when the grandees of the Catholic Church in the Irish Free State (as it was then) had intoned on the subject of women flaunting themselves in “immodest” dress.

Much later, in 1956, when Maeve Kyle became the first Irish female athlete to compete at the Olympic Games in Melbourne, she was widely criticised for abandoning her husband and child. A woman’s place was in the home, not on the playing field.

Kyle, living in Northern Ireland where attitudes to women were more progressive, was at the forefront of efforts to promote athletics for women south of the Border. Attitudes were changing and in 1962, Crusaders Athletics Club became the first club in the Republic to admit women. A year later, the Clonliffe Harriers agm, persuaded by the legendary Billy Morton, agreed to admit women and in 1963, a notice appeared in the local newspapers calling on the women of Dublin to attend a meeting in Moran’s Hotel to set up the Clonliffe Ladies section.

One of the women who who read the notice was Claire Dowling, later Walsh. It was Walsh who was to lead home that race on Santry Avenue, wearing an Aran sweater and loose leggings. In 1965, Dowling won her first AAU Irish titles in the 220 yards , 440 yards and long jump and she continued to dominate the sprints for the next few years, setting innumerable Irish record for 100m, 200m and 400m. The high point of a long and distinguished career came in 1972 when she competed for Ireland at the Munich Olympics.

Ann O’Brien (later Cummins) began her equally long winning streak in 1966 when she won All Ireland AAU mile title. She soon moved up the distances and helped Clonliffe to the first ever Irish cross-country title in 1967, winning the individual event a year later and for the next few years after that. They were unquestionably the two most distinguished women athletes of the time.

Another founder member was Frances (Quinn) Mansfield, still an active member of the club. “At first it was considered immoral, unladylike and immodest for women to be seen in shorts and many spoke out against it. But we had the support of each other and overcame the prejudices,” she remembers.

Finding women’s sporting gear was one problem. “No sports shop had shorts for women and so we had to make our own. One of the women had seen an ad in Athletics Weekly for stretchy knicker shorts. We ordered the shorts and were very proud of ourselves turning out on the track one Sunday morning. Billy Morton nearly had a heart attack then he saw us. ‘Bejapers girls, if the archbishop sees you now, you would be excommunicated’ he said. A picture of some of the women in shorts appeared in a national newspaper, and as a consequence, one of the girls was told to leave the Children of Mary.“

These were ground breaking times for women. In 1959, Deirdre Killeen was the country’s first woman garda and became another of Clonliffe’s founding members.

Club coaches at the time were Harry Cooney and Noel O’Rourke. “In the beginning, we were treated with kid gloves and only allowed to run as far as the Trinity Gates on Santry Avenue. But as we got fitter, we progressed to longer distances and very soon were doing time trials of one hour. Everyone ran for either a half hour or a full hour and the laps were counted,” says Mansfield.

When it came to track and field, everyone had a go at everything. A handicap league was held on the cinder track at Santry over the summer months on Tuesday and Thursday nights. Then when Crusaders added the Louis Vandendries Trophy for women to their existing George V Ryan Trophy for men, women at last could compete outside their clubs. Even at that, the programme was limited: the longest race women ran was the 800m and women’s hammer, steeplechase, triple jump and pole vault were considered far too strenuous for young ladies.

Frances Mansfield remembers the first ever Irish women’s national championships held on September 17, 1967 after the formation of Bord Luthchleas na hEireann united most of the athletics clubs in the country.

“We were sent to Tipperary to compete on a bumpy 300 yard track in a farmer’s field. We had to throw the discus in spikes since it was a grass circle. The hurdles were two uprights with a bamboo stick across the top.

“The relay was the crowning glory. It rained during the meet and, by the time the relays were scheduled to take place, most of the lines between the lanes had been washed away. So it was impossible to know who was running where.”

Other memorable meets included the annual Trinity Sports held in College Park, where the President of Ireland was a guest of honour, officials wore top hats and tails, and strawberries and cream on the lawn followed the competition.

Over the winter months, cross-country was the focus, with Anne O’Brien the star of the team. Training in the fields behind the stadium could be a dirty affair and in those early years, the Clonliffe women had to wash off the muck in the stream running through the demesne. Even for the men, conditions at Santry were primitive, consisting of a Nissan hut “a pokey little thing under the terrace,” as O’Brien remembers.

Since Crusaders didn’t have a cross-country team, the Clonliffe women travelled Antrim each year to compete against the Northern Irish clubs and became the first club from the South to travel abroad for a cross country race when they took the ferry to England for a match against Bury and Radcliff athletic club.

“One cross-country race sticks out in my mind. Once again it was a National Championships held in Tipperary. There was a very high ditch on the course and standing at this ditch there was a man who was helping the Tipperary athletes who got stuck over the ditch – and ignoring the other athletes,” says Frances Mansfield.

Although the women had to fight their corner, they had a staunch supporter in Billy Morton, who a tireless fundraiser for his beloved Santry Stadium, which in the 1960s, was chronically in debt. He felt that people gave more generously when women were doing the asking. On flag days, the women of the club would hit local pubs and shopping areas – and even, on occasions, the greyhound track at Harold’s Cross.

A prominent member of the club at the time was Noel Henry. Noel, a marathon runner, came up with the idea of running from Dublin to his native town of Lanesboro with a relay of the women to raise funds. One woman would run with Noel while the others collected money on the way. Frances Mansfield vividly remembers their arrival in Lanesboro.

“Practically all the people of the town had come out to greet us with lighted torches made of turf on sticks. What a welcome for Noel!” 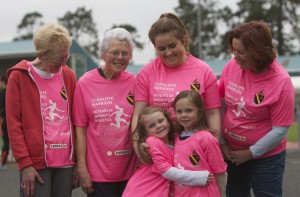 Women also played their part in the development of juvenile athletics in Clonliffe. The younger sisters of the founding members had joined the club, but were forced to train and compete against seniors – not ideal. Happily, after 1967, a boys’ cross-country league, established by the National Athletics and Cycling Association of Ireland (NACAI) , was taken over by the newly formed BLE. Soon girls’ races were added to the track and field programme and two women joined the juvenile committee as advisors. Interest in juvenile athletics really took off with the Community Games, when local residents associations formed athletics clubs and affiliated to the Dublin Youth Athletics Board (BLOE).

Others linked up with existing senior clubs and one of these, Greenfield Residents Association, who came to Santry to train, was the first association to win the overall Community Games trophy. Many of the Greenfield athletes -later joined Clonliffe Harriers as seniors.

Still, the women athletes of that era still had to fight their corner and many of the Clonliffe women felt they were still second class citizens, especially when it came to national championships. After an attempt to form women’s committee based on the Women’s Amateur Athletics Association in England, the women put their efforts into gaining equal rights within the existing system.

In the early days, women were associate members only of Clonliffe, and although they could attend the AGM as observers and had two representatives on the general committee, they couldn’t vote. It took numerous attempts over many years before the Clonliffe women got the two-thirds majority they needed to give them full membership. Clonliffe’s women then went on to distinguish themselves by their hard work not just for their club in roles such as treasurer, secretary and vice-chairman, but in assorted roles in regional and Irish athletics. It was a female member of the club that set up the club’s website at a time when the internet was in its infancy and few clubs had such a thing.

By the mid-70s the floodgates had opened. Over the middle distances, Padraigin (O’Dwyer) Moore was the women to beat. Although she came to the sport late, she won the Irish 800m title in 1974 and both 400m and 800m (in 2:07.8) titles a year later. Other prominent members around this time included sprinter Emer Diskin, cross-country international Kathryn (Moroney) Davis, Mary T Norton, and Patricia Appleby. Later came Mary Donohoe and Anne Keenan-Buckley both of them winners of the national county titles and regulars on the Irish International team.

Donohoe had started running in the first year of the Women’s Mini Marathon in 1983 – and Clonliffe was one of the first clubs to start a “Meet and Train” group for women, with over a hundred turning out in that memorable first year. A pioneer of the marathon was Kathy Shum, winner of the Dublin Marathon in 1993 and again in 1996.There were also sprinters Marisa Smith and Kathryn Walley.

In 1988, Keenan-Buckley qualified for the Seoul Olympics where she ran the 3000m. She later became one of the country’s most successful ever masters athlete and later again, was coach to the Irish team that would win the European Cross-Country title.

Another prominent member of Clonliffe was Paralympian Patrice Dockery, who competed at a stunning six Paralympic Games and rewrote the wheelchair record books over distances from 200m to the marathon. Then there was the late Ann Kearney, one of the founders of triathlon in Ireland and a more than competent distance runner.

“We have overcome many obstacles, discrimination, narrow-mindedness and chauvinism, but we persevered against all prejudices and, with pride, we took our place in the world of sport.”