In February, Bernowska improved the eight-year-old record to 252.6 kms(159.2 miles) at the Polish Championships.

Among those taking her on this  weekend are current European champion Maria Jansson of Sweden and a strong American team led by the reigning world champion Katalin Nagy. Leading the Irish team is Ruthann Sheahan, who set an Irish record of 229kms(143 miles) when finishing seventh at the 2012 World Championships.

Defending his men’s title is Germany’s Florian Reus who has had a quiet year but ran 263.89kms(163.9miles) to win the World Championships in 2015 and then went on to finish first in the grueling Spartathlon in Greece. American Pete Kostelnick has a PB of 263.41 kms (163.68miles) while leading the British team is European champion Dan Lawson who covered 261.8kms(162.7miles) at last year’s European Championships and has spent last weekend enjoying himself at Glastonbury. He’s backed up by Robbie Britton, who has also run over 261.14kms/162.26miles in 24 hours.

Leading the Irish men is Madrid-based Northern Ireland native Eddie Gallen, who will run his 34th 24-hour race. Now aged 54,  Gallen Eddie has competed for Ireland at the last eight World Championships. He’s joined by national champion Eoin Keith, who last May ran the length of Ireland Mizen to Malin in just over 3 days and 3 hours. Keith holds the Irish 24-hour track record of 244.664 km which he set in in Belfast in 2013.

Some 42 nations will be represented in Belfast, with the competition incorporating the WMA World Masters Age-Groups Championships for the first time.

A FULL IRISH TEAM is competing at the Europeans Combined Events Cup in Monzon, Spain this weekend for the first time in many years. 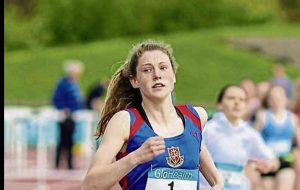 Leading the team are Irish champions Shane Aston of Trim AC and Amy McTeggart of Boyne AC. Also selected are Michael Bowler of Enniscorthy AC,  and Clonliffe’s Rolus Olusa of the men and Kate O’Connor of St Gerard’s AC  and Sarah Connolly of North Down AC of the women.