Fifth win for Clohisey in Fields of Athenry; course record for Shaughnessy

Race favourite Mick Clohisey of Raheny Shamrock lived up to his pre-race billing when he won the Fields of Athenry 10km for a fifth consecutive year earlier today. That equals Gary Thornton’s record of five wins in the race.

Clohisey was out on his own for much of the race and finished in an untroubled time of 30 mins 35 secs – well off the 30 mins 3 secs he ran when winning last year. In second place was Galway master Matt Bidwell in 32 mins 48 secs, while third was Brian Furey of Rathfarnham WSAF in 33 mins 12 secs. Running in the M60 class was Mick’s dad Vinnie (42:44); winner in this class was Galway’s Martin Kearney in  39:44. 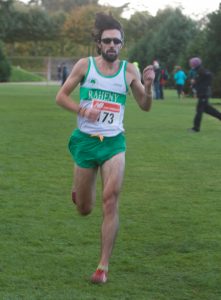 Setting a new women’s course record of 35 mins 3 seconds on her way to victory was Laura Shaughnessy of DSD, who is a Galway native. Shaughnessy finished ninth overall, with local athlete Jane Ann Meehan a distant second in 37 mins 43 secs. Well over a thousand finished the race. Full results www.redtagtiming.com.

DONORE’S  Eric Keogh was the runaway winner of the Burke Oil Streets of Wicklow 5km with his time of 15 mins 11 secs putting him almost a minute clear of the chasers led by Brian O’Kelly of Crusaders. In third place was Gareth Murran of Sportsworld. First woman was Andrea Lawlor of Kilcoole AC in 18 mins 15 secs. Medbh O’Keane was second woman and first junior in 18 mins 29 secs. A total of 399 finished the race. See www.myrunresults.com

AT THE ANNUAL Greencastle 5-Mile in Co Tyrne, Paul Pollock was first home in a fast time of 24 mins 52 secs – his third consecutive win in the race. First woman was Catherine Whoriskey of City of Derry AC Spartans in 28.12. Letterkenny’s Catriona Jennings  was second in 28.56.

ENGLISH VISITOR Brian Horton led home a record entry of 526 at the MSD be Well Clonmel 4-Mile. Horton’s winning time of 18 mins 58 secs was just four seconds off the course record. A fighting second in 19 mins 6 secs was Clonmel’s William Maunsell – a personal best time for the course. Third was Brian Maher of Kilkenny City Harriers in 19 mins 10 secs. First M40 was Denis Shanahan of Thurles Crokes in 21 mins 35 secs, while the first junior was Darren Dunne of Nenagh Olympic in 20 mins 5 secs.
Siobhan O’Doherty of Borrisokane AC was a worthy winner of the women’s race with her time of 21 mins 52 secs just two seconds outside her own course record set in 2013. Claire Annan of Clonmel AC and Sally Forristal of St Joseph’s AC were second and third. First junior was Portlaoise’s Louise Stack in 24 mins 30 secs

CONDITIONS  were perfect for the Bull Run 6km in Dublin’s Dollymount, where Eoin Flynn finished ahead of Mark Rossiter and Mark Cahill among the senior men. Previous winner Raheny’s Orla Gormley was first woman, with Ciara Losty second and MargaretWyse third. Best of the masters was Mick Devaney, who was followed home by Matt Cooley and Vivian O’Gorman.

Boys and girls ran a shorter race with James Rose, Darren Murphy and Aidan Hogan the top three boys and Hazel Kenny and Harriet Kenny best of the girls. Impeccably organised as always by Michael McAuley and the Irish Wrestling Association.

GET  YOUR NEW YEAR  off on the right foot in Dublin’s Phoenix Park next Sunday where the annual Tommy Brennan New Year’s Day 5km will start from the Furze Road at noon.